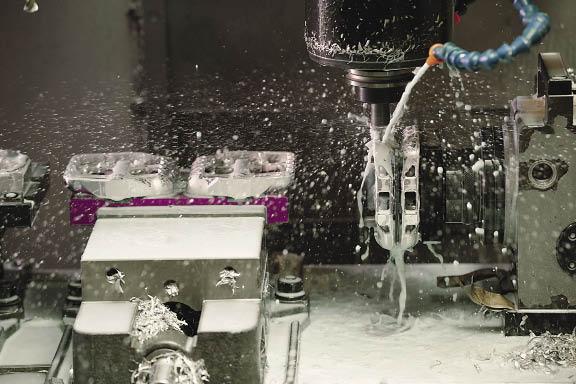 Can vertical machining centers go toe-to-toe with horizontals on performance?

It’s a tall order to expect a vertical machining center to compete with a horizontal. Horizontal machining centers are smarter, faster and cheaper than ever before. Many would argue they are the logical choice for a variety of machining work, from low-volume medical and aerospace parts to lights-out machining for job shops and automotive manufacturers. Horizontals have greater tool capacity, are more suitable for automation, and even a commodity HMC offers a built-in indexing table and pallet changer, right out of the box. So why would anyone want to buy a vertical?

There are lots of reasons.

Even small VMCs, such as this Haas VF-2, can be set up with multiple vises and a 4th-axis rotary table to simplify setup and improve productivity. With the set up shown, three operations are performed during each cycle, producing a complete set of parts.

William Howard, product line manager for VMCs at Makino Inc., Mason, Ohio, said, on average, there are four times as many verticals sold in North America each year—6,500 to 7,000 machines—than horizontals.

Howard said: “Because of this, there are a whole group of folks out there familiar with running, maintaining and programming verticals: setup people, operators, manufacturing engineers and, especially, shop owners. Since more metal- working professionals have experience with verticals, and they’re typically less expensive, a VMC—many times—becomes the easy solution.”